make plans, but understand that we live by God's grace

Dhading, after a long time

On October 2, 2012 by Sunila With 0 Comments - Uncategorized

After almost a year I visited Dhading.  It wasn’t a holiday or a vacation but as always work in which I sneaked some fun time to roam around, have chatpate and spend some beautiful time with friends. Rainy season had made Dhading more beautiful and amazing to live in. I loved it there.

Strange, it happened in Kalanki bus station when i was heading toward Dhading. As discussed before Arun dai was to get tickets from 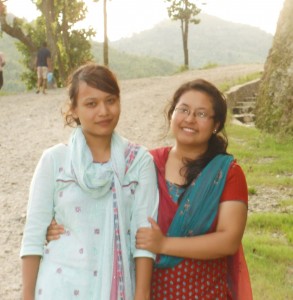 gongabu bus station and me and Karuna (my friend) were to catch bus from Kalanki. When the bus arrived in Kalanki most of the seats were empty. We got in and to my amazement bus driver turned the bus in opposite direction. We were not sure what he was doing. We asked but no response. One of the passenger said he is trying to get more people in. After a round when we reached petrol pump (from where the bus leaves Kathmandu) of Kalanki again he turned the bus and went in an opposite direction for the second round. That was weird. I was glad he didn’t go for the third one. 😛

One thing that annoys me always when I travel Dhading is songs bus driver plays in a volume intolerable for humans. I told him thrice to cut the volume, he did but later again turns it up. All the songs he played were from some dohari album and jhaure. One of the song said “Dubayo Papi Maya le” re 😀 fun-ny. It’s wired. Choices of different people.But despite of these unwanted moments I enjoyed a lot in Dhading. Though I was there for work, no one said I cannot steal some tiny winy moment to have fun. Rain, rice fields, rivers, clean air, mountains, forests everything was so good. And on top of those CYCLING…. After long long time I got to ride a bicycle. WAH !!!! Loved it.